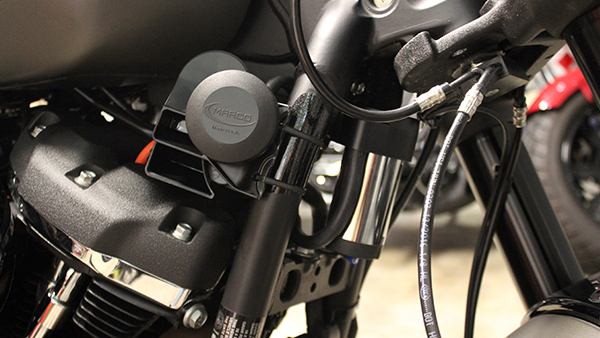 This page describes the steps required to install the Marco Tornado Air Horn, sold by Custom Dynamics, on a 2018 Harley-Davidson Fat Bob. The Marco Tornado is a compact dual horn air horn. But even with it’s smaller size, it was still too large to be installed on the Fat Bob as one unit. The best option we found was to separate the horn from the compressor and install with the compressed between the two down tubes and the horn mounted on the right side down tube.

Our first order of business was to separate the compressor from the horns. You achieve this by simply removing the two screws used to clamp the horns to the compressor. 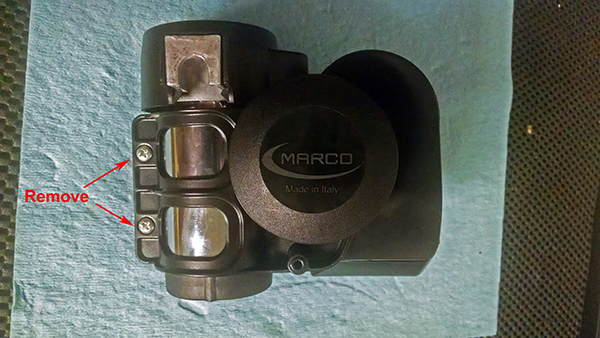 With the screws removed, insert a screwdriver between the two halves to spread the clamp open. 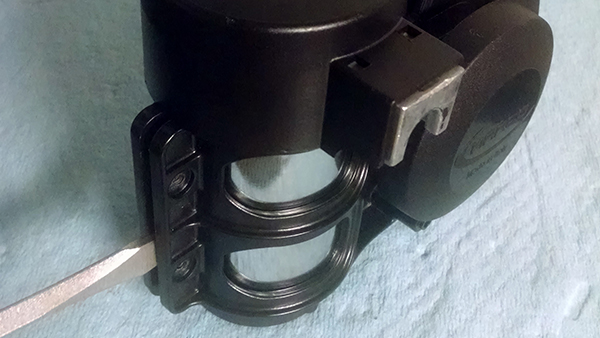 Gently slide the compressor up and out of the horn clamp. 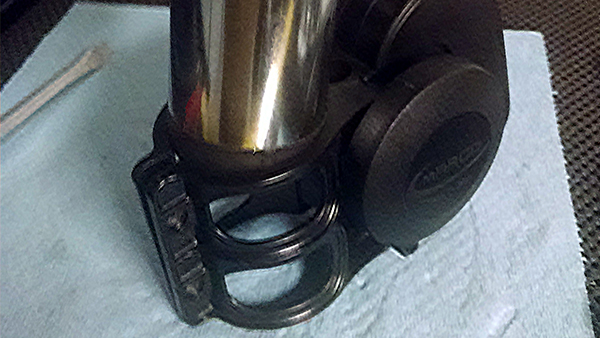 With the compressor out of the horn clamp, remove the rubber hose that connects the compressor to the horns. We will replace this with a longer piece of hose later in the installation. 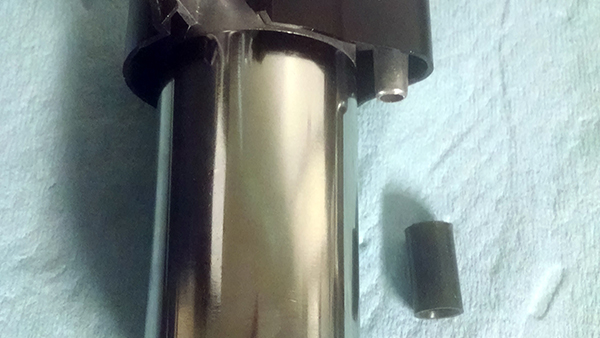 Now we start the “point of no return” modifications by removing the clamp part of the horns to allow the horns to be attached to the down tube on our bike. The plastic is not hard so we used a pair of metal snips to snip off the three arms of each side of the clamp. We then smoothed out the snipped areas with a couple of passes with a file. You can use snips, a hack saw, a coping saw or a band saw if you have one. 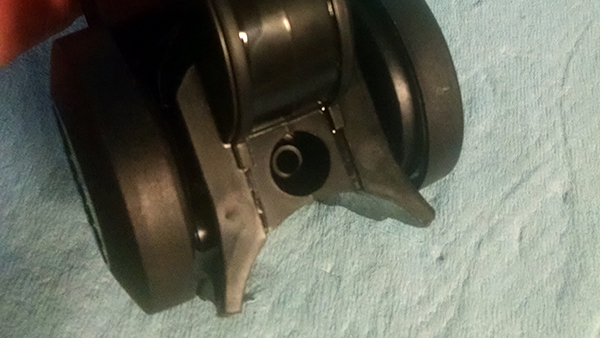 The next step is to very carefully drill two holes in each side of the remaining clamp flange. Tie-wraps will be run through these holes to mount the horn to the bike’s down tube. 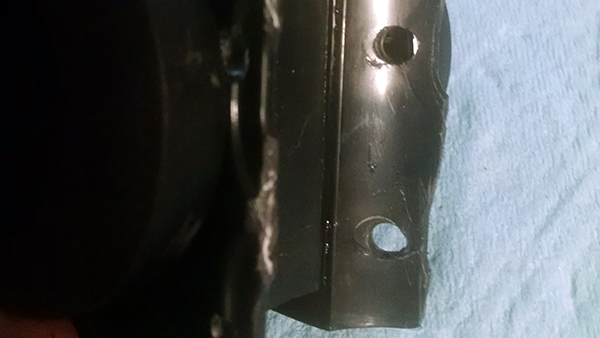 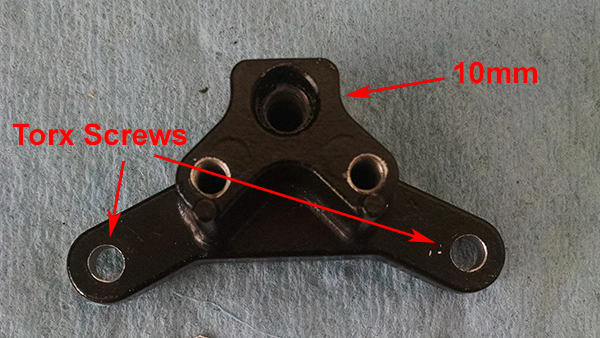 We made hand cut a custom bracket using materials on hand to mount the air horn compressor to the horn mounting bracket. 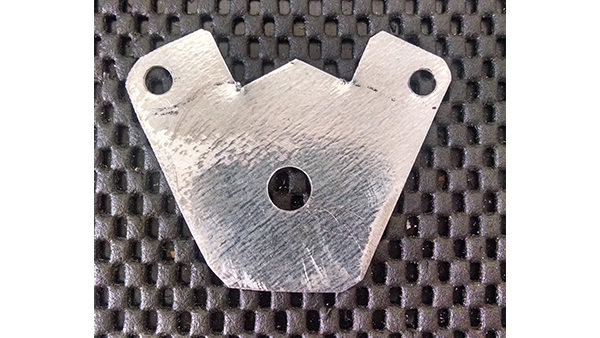 The two brackets will be fitted together as shown below, with the two OEM torx nuts connecting the pair to the plastic piece. The hole in the new bracket will be used to mount the compressor to the bike. Easy, right? 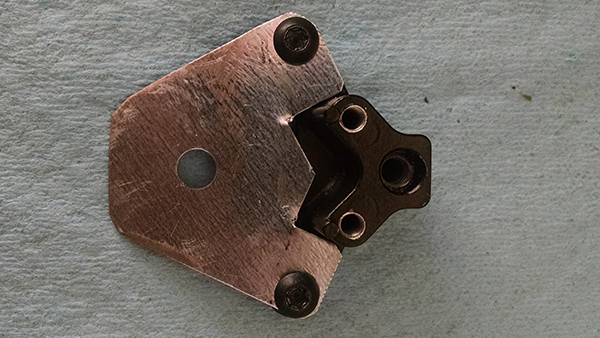 The horn is tie-wrapped to the right side down tube. The compressor and horns are connected using a 12″ piece of hose. We used hose that we had on hand, but you may need to go to your local auto parts store to source hose. You want hose that will not kink when bent. If the hose kinks, the air can’t flow and the horn won’t blow! 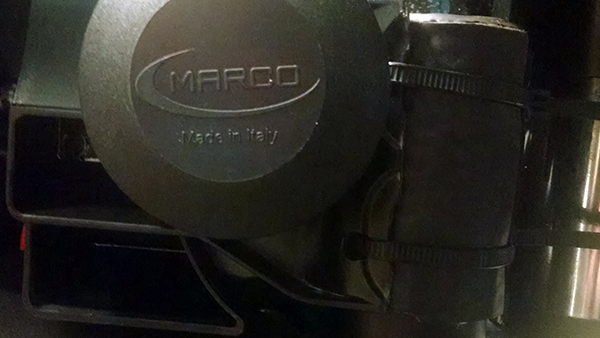 With the hardware installed we start the wiring work. As mentioned earlier, the Tornado comes with a relay that has a mounting tab and a small mounting screw. In it’s stock configuration, the screw is used to mount the relay to a hole in the back side of the plastic of the horn. For our installation, we mounted the relay under the right side cover panel under the seat. We used the screw provided with the Tornado to mount the relay to the plastic batter cover. The screw can be easily removed and the relay moved out of the way for access to the battery. 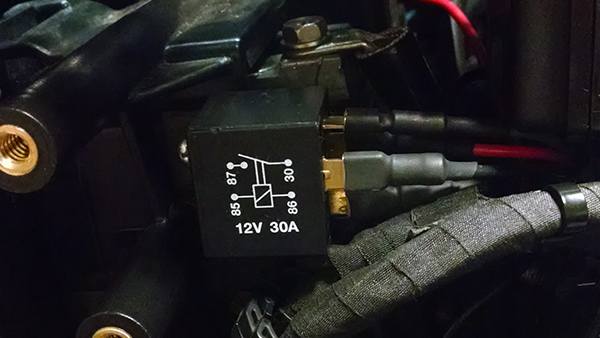 Wiring was then run from the relay to the front of the bike as recommended by Marco. The wiring instructions provided on the Tornado box can be confusing. Here is a cheat-sheet of the relay blade numbers, wire colors we used, and how they were connected to the bike’s power, stock horn leads and the Tornado. 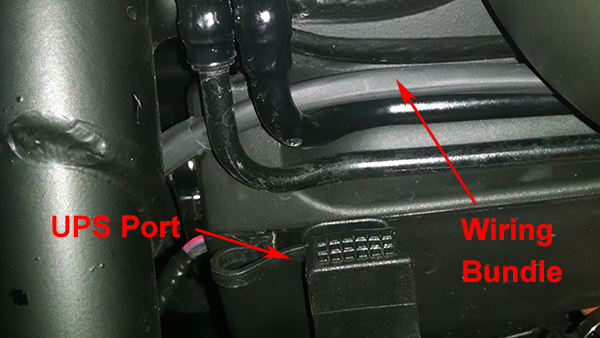 We connected female spade lugs to the green and black wires and connected the green wire to the + terminal on the Tornado and the black wire to the – terminal on the Tornado. We connected a male spade lug to the red wire and connected it to the + wire from the original OEM horn which allowed the connection to be made without modifying the OE horn connector. This means we can unplug and remove the Tornado, reinstall the OEM horn and return the bike to stock if that ever is desired.

Then we tested the horn. Click Here to hear it!

The final modification we will make will be to paint the compressor body black to make it blend into the bike better.

Contact us on our Facebook Page if you would be interested in having one of the compressor mounting brackets. If there is enough interest we may have some made and properly powder coated.