Here is the original press release for the album.

Four years in the making, recorded across the globe, and featuring bands and artists from the US, UK, Australia and The Netherlands, this CD features new cover versions of classic ELO deep tracks and hits such as “Strange Magic”, “Can’t Get It Out Of My Head” and “Do Ya”, with the grand finale song “Mr. Blue Sky” featuring performances by a collective of 8 musicians across 5 US states plus the UK.

Electric Light Orchestra was formed by original members Jeff Lynne, Roy Wood and Bev Bevan in 1970, with the goal of merging rock and classical music. The band charted over two dozen hit singles in the UK and US, becoming a global success in the process with over 50 million record albums sold.

All net proceeds from this CD were given to two charities chosen by the contributors involved: The George Harrison Material World Foundation and Birmingham Children’s Hospital. 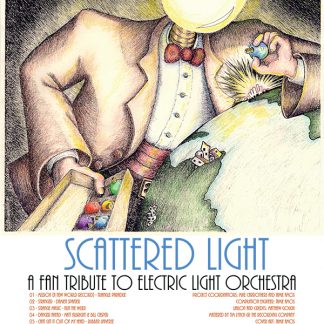